Gateway Center Green Roof on the SUNY ESF Campus, designed by Andropogon Associates, Ltd.
It is the philosophy of Andropogon Associates, a prominent American Landscape Architecture firm, that a place's historical ecology should be integral to its future use. Andropogon has far-reaching tendrils in the design realm, with completed work the firm’s home city of Philadelphia, Washington D.C., the Middle East, Asia and Europe. Andropogon is responsible for the intensive green roof on the esteemed Gateway Center, a LEED certified building on the SUNY College of Environmental Science and Forestry campus. Andropogon is very much a pioneer in ecology-minded landscape design, as corroborated by firm Principal José Almiñana. In an interview with the National Building Museum, Almiñana explains how “our guiding principles include: evaluate solutions in terms of the larger context-every action contributes to the whole; foster natural systems soils, air, water, plants, and wildlife-these are our life support; integrate cultural perspectives and environmental resources-people are part of ecology; and conserve resources-they are the wealth of the next generation.”With 75% of the world’s population predicted to live in an urban environment by 2050, it is imperative that cities are retrofitted with pedestrian-oriented greenspaces to promote environmental and human health. [i] Perhaps the following statement by Almiñana is the most revealing of what it is the firm Andropogon stands for: “As we [the world] look to the prospects of the human population on this planet, there is no doubt in my mind that cities offer the best opportunities to reduce our carbon footprint and provide an intergenerational equity.”[ii]
Leslie Sauer, an original founder of Andropogon Associates, denounced the failure of New York City to maintain its landfills during her time as an environmental consultant for Fresh Kills, a landfill on the southeast border of Brooklyn and Queens. Labeled by the state of New York as a toxic site, residents of nearby Brooklyn and Queens expressed concerns for public health and safety. This outcry was warranted, as runoff laden with heavy metals, petro-chemicals, pesticides, and PCBS were leeching into Jamaica Bay, and as the landfill was prone to fires and the emission of noxious fumes.[iii] When landfills are decommissioned, as Fresh Kills was in 1980, it is protocol to cover the area with plastic, clay, and a few inches of soil, which is then seeded with grass that requires annual mowing. Appalled by this unsustainable practice, Sauer advocated for a more holistic approach, which would foster an ecology for the former landfill. She would enlist the roots of trees for erosion control, and carve Fresh kills into an archipelago, if you will, with each island featuring a different ecological niche, with some reminiscent of the Pine Barrens found in New Jersey and others the dune community found in Fire Island. With a $20 million price tag, trees were densely planted on the capped landfill, at a ratio of 800-1000 trees per acre. The project has been enormously successful, with 93 percent of the tree and shrub saplings planted in 2004 having survived. As intended, the newly available habitat has beckoned a diverse array of water fowl and predatory birds, including egrets, snowy owls, and ospreys.[iv] It is evident that Leslie Sauer’s experience in rehabbing the Fresh Kills landfill helped to develop Andropogon’s ecological orientation as a firm and in their approach to future projects.

Tree saplings flourish on the former landfill at Fresh Kills 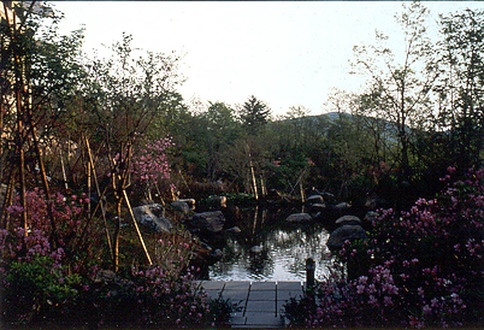 Ornamental pond doubling as storm water retention basin on the premises of the Nikko Kirifuri Hotel and Spa
​In 2001, Andropogon was tasked with refurbishing the Nikko Kirifuri, a 3-acre hotel and spa on a forested hillside in the mountainous and rural region of Central Japan. Elegance and minimal intrusiveness were identified by the firm to be integral to their design concept, while converting unattractive ditches into ornamental ponds, which would double as storm water retention basins, was also deemed a design priority. The site presented a variety of challenging terrains, such as sensitive woodlands, highly erodible soils along streambeds, and steep slopes.[v] Andropogon demonstrated their sensitivity to the local ecology by painstakingly salvaging 1800 trees that were growing on site and infirmed these specimens for three years in a rice paddy in the nearby countryside, all to replant them on site once the major infrastructural features were constructed. Andropogon was privileged to work on such an undertaking considering the projects tremendous cultural importance; Nikko is the first large-scale project that combines an ancient aesthetic traditional to Japanese landscape design with a Western interpretation of ecology. As explained by Carol L. Franklin, a principal at Andropogon Associates, “every aspect of design was crafted to protect, repair, and dramatize the natural resources of the site in a style that reflected a Japanese sensibility to place. The design vocabulary for the gardens, roads, parking lots, paths, terraces, and courtyards was inspired by the rich, layered structures of the native forest and the whimsical and colorful patterns of rural Japanese villages.”[vi] Upon completion of the project, all disturbed areas were restored to their original condition.

The mechanics of bioretention @ the U.S. Coastguard Headquarters
Andropogon Associates has served as the landscape architect and ecological planner for the newly designed United States Coastguard Headquarters Facility, located 2.5 miles from the U.S. Capital on the historic 183-acre St. Elizabeth campus. Covering 1.2 million square feet, it dwarfs the SUNY ESF Gateway green roof, which is only 10,000 square feet in size. According to the firm, the overall landscape is “informed by detailed site analysis, sustainable design principals, and stormwater Best Management Practices, creating a functional landscape with exceptional performance and beauty.”[vii] Features such as green roofs and bio-swales work together to detain storm water flow, filter impurities and recharge the aquifer while reducing the heat island effect, creating wildlife habitat, and providing aesthetic and educational benefits”.[viii]   ​ 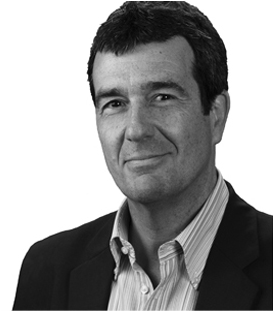 José Almiñana, joined the Andropogon team in 1983, became a principal in 1995

​          Andropogon's staff is as diverse and the firm's portfolio of work; as a certified minority business enterprise (MBE), the firm's office is a bastion of multiculturalism. From a project's inception to its completion, all staff members contribute regardless of race, creed, or ethnic background. As for the name of the firm, Andropogon is the name of a species of grass endemic to the U.S. that is usually the first to colonize a disturbed parcel of land. As reflected in its name,  Andropogon has pioneered ecological design and has contributed to a greater ecological consciousness, as well as a more thorough understanding of the inner workings of nature in the Landscape Architecture industry.
​
[i] "Interview with José Almiñana, Andropogon Associates." Interview with José Almiñana,
Andropogon Associates. April 1, 2009. Accessed November 30, 2015
<http://www.nbm.org/about-us/national-building-museum-online/an-interview-with-
jose.html?referrer=https://www.searchlock.com/?referrer=http://www.nbm.org/about-
us/national-building-museum-online/an-interview-with-jose.html>.

[iii] Chang, Kenneth. "A Wooded Prairie Springs From a Site Once Piled High With Garbage." The New York Times. September 6,