Pictures taken from SUNY ESF Moon Library Fletcher Steele Archives and (2)
Steele had a thorough design process. He determined proportions, scales, composition, mass, form, line, pattern, texture, silhouette, what belongs where, and what is appropriate in complexity (1). There was always balance in light and dark, pulling from traditional to make new, contrasting color, and in usage of space, with barriers and illusions of expanse. He would ask the clients series of random questions to find what clients like or don’t like; Steele wanted the client to dream in his gardens, as he used their own preferences to dream and imagine, experiment, and create solutions (2).

http://www.rollingridge.org/about-2/mission-and-brief-history/historic-landscape/
Steele had his first client in 1915, Ethan Allen. He wanted a garden on a forty acre peninsula on Lake Cochichewick in North Andover, Massachusetts (2). He needed to revamp creations previously made by Andrew Hepburn (2). The garden he created had grand entrances to each focal point, and a vast build up to each point which made the space seem larger than it was (Refer to sketch below on left). European forms could be found throughout the garden. Hedges, shade, and rhododendrons concealed what lied ahead, similar to garden borders in England (2)(Image above).  Steele designed a bold walkway revealing a view of the lake at the end, which reflected Generalife walkways with little fountains on each side of the path (2). “The dominating piece was a long bowling green, flanked by vibrant rhododendrons, leading to a 25 foot circular pool that overflowed into 3 cascading fountains” (3)(Bottom right image). Steele played with light and shade, especially around the staircase surrounding this Italian fountain he designed, progressing from a sunlit area to a shaded area, going from the built to the natural landscape. Accompanying the shift in light, a shift in sound was made from intense sound to calm rippling. Steele focused on color in his transition between corridors, using rhododendrons going pink to red to violet. Even the staircases and walkways were carefully colored with a peach color which gave warmth to the area, as well as surprise. Experimenting with different derived forms and techniques, Steele was able to create a unique garden, known as Rolling Ridge, which would amuse its users. 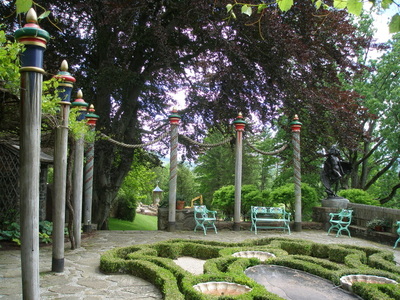 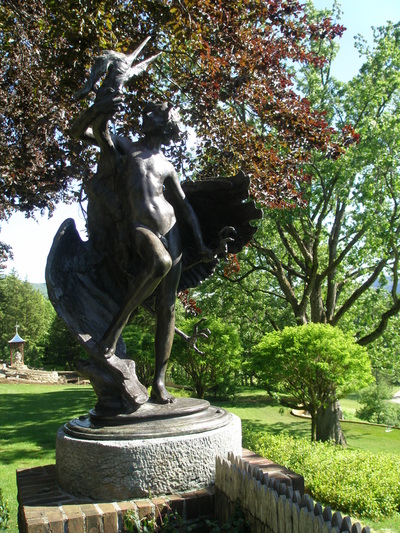 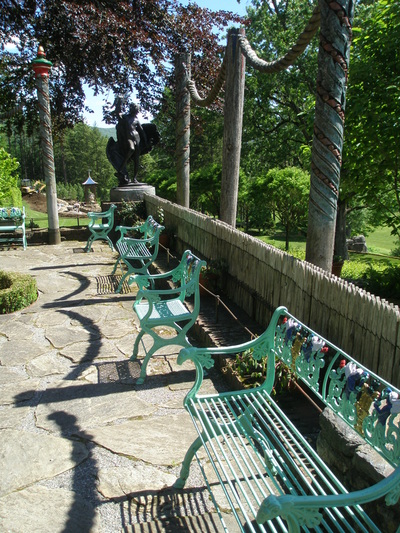 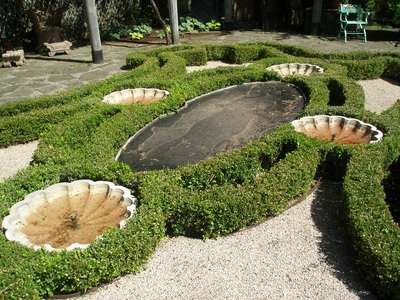 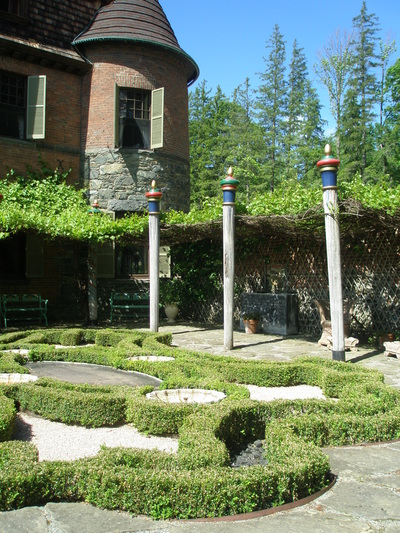 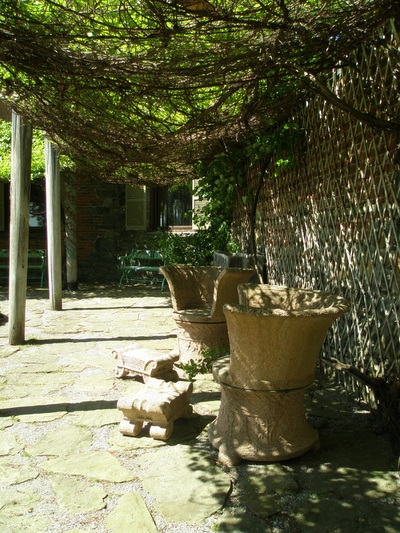 http://nanquick.com/tag/the-blue-steps/
Various views of The Afternoon Garden.
Traditional forms of architecture were used preserve the work of the estate,s first architect, Nathan Barrett. The garden was 35 feet wide and 45 feet long. Steele used Mabel’s outdoor room analogy, using a wall and several trees to confine the viewer into a room, ground cover to create a carpet, and columns to capture the valley view from the garden and connect the room to its surrounding landscape. The posts were in a Norwegian style, “Their shape must be good yet a touch of nonsense would do no harm… Why not follow the color of medieval trappings… which are both strong and gay?” (2). Displaying the success of the genius loci, as Steele preserved an old elm tree, it in turn benefitted Steele as its old age resonated with the wall to make it seem older. Dark colors were used for the infrastructure of the garden, the bricks and the trees, while lighter colors were used on the ground with marble, flowers, and furniture. A statue, Boy with Heron, was placed in the garden, as Steele admired the way light and shadows played off its features (Karson 1989). Steele was able to take traditional forms, and experiment with them to make an entirely new, cohesive design. This design marked the start of an extensive relationship between Steele and Choate, during which they would create many designs together at the estate.

Blue Steps
Client: Mabel Choate
Problem: Needed a staircase down a hill that was not steep and easy to walk down
Location: Berkshire summer estate in Stockbridge, Massachusetts
​Size: 100 ft x 80 ft
Focuses: Italian water structure, color, lines, shade, and genius loci
Media: birch trees, concrete, paint (blue), steel, water (4)
Steele began to imagine Italian gardens with water staircases, and was inspired by the Swedish strategy of having defined turning curves, which was incorporated into the railing design (2). Four stacked archways were the center of the design, decreasing the slope steepness, and on each level, there were a few stairs, then ramps on both sides, so that transportation down the stairs would be easy for Choate. Cylinders surrounded the stairways, echoing the wooden column edge to the Oak Lawn, another project that Steele had worked on in the estate. The structure has a bold look from the front, but blends into the nearby landscape by connecting the house to the garden below, and having an outstanding view of the Berkshire Mountains from the top. The underside of the concrete arches pressed into the hill was painted blue; an Italian hue (2). White was another focus, as white railings wrapped native white birches on each level. The railings had a functional attribute, allowing Choate to be able to look at the mountains, while feeling safe from the semi-circle rails above the blue arches. Hedges were used behind the railings to further define the color of the railings. Control was made to the amount of water passing to have enough pleasant sound but not too much, and shading was maintained throughout the walk down (2). This proved to be Steele’s most famous design, with all elements of his philosophy clearly defined, and the creation itself revealing the experimental, creative designer he was.

Over time, Steele learned that it is not just the garden itself that makes it special, rather the success of the designer in portraying who they are by what they create (Karson 1989). His career in garden design guided the transition from Beaux Arts formalism to modern landscape design. He was able to make former garden ideas his own through inspiration of European forms to create his own style and flair, mixing, matching, and designing original features. This unification was shown throughout Steele's work as he built 700 gardens in his Boston practice from 1915-1971.
Citations:
1. Steele, Fletcher. Gardens and People. Boston: Houghton Mifflin Company; Cambridge: The
Riverside Press, 1964.
2. Karson, Robin. Fletcher Steele Landscape Architect: An Account of the Gardenmaker's Life, 1885-1971. New York: Harry
N. Abrams Inc./Sagapress, Inc, 1989.
3. Rolling Ridge Retreat and Conference Center. "Historic Landscape." Accessed November 29, 2015.
http://www.rollingridge.org/about2/missionandbriefhistory/historiclandscape/
4. Artgrok. "Blue Steps of Naumkeag." Accessed Novermber 29, 2015.
http://artgrok.org/browse/thematicarts/architecturalarts/landscape/gardensbluesteps-naumkeag