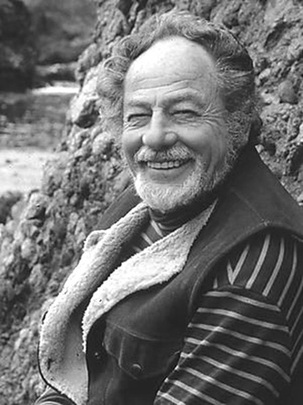 figure 1.
The American landscape architect and designer, Lawrence Halprin, is one of the most important landscape architects in the modern era. Born on July 1st, 1916, Halprin lived until he was 93 years old and died on October 25, 2009. He grew up in Brooklyn, NY, although spent many years traveling around the world and eventually settled in San Francisco, CA. Halprin’s studies began at Cornell University where he studied plant science. At this school he had dreams of one day being a professional basketball player. He graduated with a bachelor’s degree and moved on to his masters at the University of Wisconsin studying horticultural science (Source 5). It was in Wisconsin where not only did he find his wife, but he found his love for landscape design. He specifically enjoyed his visit to Frank Lloyd Wright’s home estate, the Taliesin, located in Jones Valley, Wisconsin. Halprin’s wife, Anna Schuman, played a large role in his design process. She influenced him with her Avant-Garde dance movements and choreography to see how people move through open space. These experiments are described in his book RSVP Cycles and are a great influence for design and creativity (Source 1).

All in all, I thoroughly enjoyed researching Lawrence Halprin and all of his designs. His ideas are modern and well thought out. Every detail is important to him and it is reflected in his work. I admire that most, if not all, of his designs are meant to engage human activity in them and all are interactive. Working with natural elements such as water is impressive; it amazes me how he learns how to trigger different emotions through them. Combining these human qualities with nature is an important aspect that he fuses together in such a balanced manner.
figure 1. https://placesjournal.org/assets/legacy/media/images/330_halprin.jpg
figure 2. https://upload.wikimedia.org/wikipedia/commons/0/07/Seattle_Freeway_Park_24.jpg
figure 3. http://3.bp.blogspot.com/-PvtGfYEh7wk/T96rLhliM3I/AAAAAAAAAaQ/lnuOUYfBjkI/s1600/keller+fntn.tiff
figure 4. https://publicuseofprivatespace.files.wordpress.com/2012/10/ft5k4006v5_00121.gif
figure 5. https://c1.staticflickr.com/5/4123/4861476850_2ee087444a_b.jpg
figure 6. http://www.columbia.edu/itc/ architecture/wright/6769_2002 /images/week9/ix14.jpg
figure 7. http://www.pvnworks.com/blog/nicollet_mall_part_4_the_original_nicollet_mall_design/4text.jpg
figure 8. http://static.panoramio.com/photos/large/107017670.jpg
figure 9. http://graphics8.nytimes.com/images/2009/10/28/arts/28halprin_CA0/articleLarge.jpg
figure 10. https://upload.wikimedia.org/wikipedia/commons/c/c7/Franklin_Roosevelt_Memorial_waterfall.jpg
figure 11. http://www.mccullagh.org/db9/1ds2-5/fdr-memorial.jpg
​figure 12. http://www.landscapeonline.com/research/lasn/2010/09/img/I&A/I&A-6.jpg
figure 13. http://www.washingtonpost.com/wp-srv/local/images/fdr/halprin.jpg