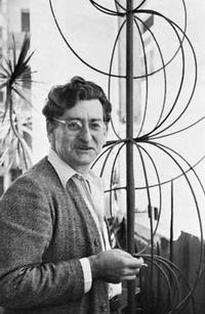 Figure 2
​“A great artist in whose mind and heart were no boundaries, Burle Marx was a fluid thinker unconcerned by living within limits.” A quote stated by fellow Landscape Architect Martha Schwartz characterizes Roberto Burle Marx as the prominent designer he lived to be (1). Roberto Burle Marx was not limited in the field of art, not only a designer but also a painter, sculptor, illustrator, jeweler, and more. Burle Marx was born August 4, 1909 in Sao Paulo, Brazil. Burle Marx began his career studying art in Germany in 1928, but soon became interested in tropical plants while visiting the Dahlem Botanical Gardens. After returning to his home in Brazil two years later, he completed his first design at his home, resulting to be 8,600,000 square feet of gardens containing rare species of plants. From there, Burle Marx went on to complete garden designs all over the world. Burle Marx would live as one of the most prominent figures in the world of Landscape Architecture until his death in 1994. (2)

​Roberto Burle Marx had a specific set of principles he used to complete his designs. These included analogy, contrast, repetition, isolation, expansion-reduction and rhythm. Analogy refers to the grouping of different plants that held similar features in the garden. Burle Marx used contrast to complement different colors and textures for the viewer. Repetition was used to emphasize plants with similar colors, forms or textures. Certain plants that held unique features were highlighted using isolation. Expansion-reduction is the adding or subtracting elements of landscape to create a desired effect. Lastly, Burle Marx used rhythm by changing the lighting, natural effects such as the noise of water, sound of leaves rustling, the smell of flowers, etc (3). All of these design methods affect the experience visitor/viewer will have when viewing his gardens. Burle Marx worked to create projects such as private and public gardens, and public green spaces. (3)

​One of Roberto Burle Marx’s most glorious private garden designs was made for a friend, Odette Monteiro, located in Rio de Janeiro, Brazil (3). This garden is known as one of his most famous designs. Odette Monteiro was a close friend to Roberto Burle Marx, and after her death the new owner requested that Burle Marx restore the area. He completed this design while still preserving the existing landscape and topography of the area. This garden is described as “The outlines of the herbaceous borders echo the undulating silhouette of the hills, and the plant section repeats the tones of the trees flowering on the hillsides”. The lake produces a mirroring image of the scenery and the continuous movement of the sky, creating a “garden” of clouds and leaves. The formation of the vegetation, which is placed in clumps alongside the lake, gives this garden a unique style. The vegetation of the garden, which is placed in curved beds with massed plants followimg the natural decline of the landscape, is one element that makes the garden famous. Burle Marx used his principle of contrast when he placed monochrome blocks filled with different colors of flowers and leaves. Burle Marx created a harmony within the garden by the connection of the garden and the natural landscape.

The Ministry of the Army is a well-known public garden Roberto Burle Marx composed in 1970, located in Brazil. (3). This public garden consists of a dynamic geometrical design, which follows the shape of the area. Not only is it based on a triangular motif, but it also features heavily contrasting colors. The garden is a very open space, appropriate for holding a large crowd of people. The ground of this site is made up of granite slabs and Portuguese stone, which is crossed by continuous plant beds filled with extravagant and colorful flowers and plants. In the center of the garden is a lake, useful in the hot climate, which reflects the images of the surrounding sculptures. These sculptures are placed for visual aesthetic, along with anchors for the aquatic plants. The sculptures are shaped as crystals, which symbolize a tribute to the mineral riches of Goias. One problem with this garden was that many plants that were proposed for the garden were not able to be planted, so a large number of buriti, a local palm tree, and ornamental grasses were planted. The reflections of these plants in the lake, along with the reflection of the sculptures create contrast in that area.

Roberto Burle Marx’s most famous public landscape design was called Copacabana Promenade, located at Copacabana Beach, Rio de Janeiro. It was designed and carried out in 1970 (3). The buildup of overdevelopment and building created a wall between the city and the beach. In order to clear that wall and provide a transition area for cars and pedestrians, land was claimed and this area was built. This project did have limitations due to car parking and underground installations, so the solution was to create a broad, open paved area. Across the area, groups of trees were planted where there was sufficient depth. Portuguese stone was used for the pavement because of the thermal expansion it allows. Also, the color scheme of black, white and red was able to be seem from the roofs of nearby buildings and passing motorists, people, and those gathered at the cafes. The design of the black and white waves soon became the trademark of the Copacabana beaches. The ripple design of the pavement represents the notions of waves.

​I thoroughly enjoy researching projects that Roberto Burle Marx created or was involved in. I don’t only see him as a Landscape Architect that transformed the field, I see him as someone to look up to for my own work. It is easy to relate to his designs and agree with the elements he used to carry his projects out. The use of plants as a medium in the world of art is amazing. Not only did he use plants to create landscapes, but also in other aspects of his life. I feel as if Roberto Burle Marx’s work will always be relevant in the world of Landscape Architecture.