Walter Hood is one of the most known and respected landscape architects of this generation. Since 2003 he has been running his own firm, Hood Design, in Oakland California. His firm almost exclusively does work in the public realm and urban environments. Hood’s work focuses on the community and how to bring people together. He also has a strong connection with the black community and tries to draw an association between them and his work. Coming up to the age of 60, Hood has gone through a lot of hard work and dedication to make him into the success that he is today.

​            Hood was born in Charlotte North Carolina in 1958. Staying close to home Hood attended North Carolina A&T State University for his bachelor’s degree in architecture in 1981. Following his education in North Carolina Hood went out west to attend the University of California, Berkeley. It was once he attended this school that he became involved in landscape architecture. From this college Hood received his master’s degrees in architecture and landscape architecture in 1989. Since Hood attended school in California he has been building a very strong relationship with the black community of Oakland, as stated before this is where he decided to make home for his firm in 2003. But even after establishing himself as a powerful firm Hood would decide to continue his education. Hood acquired yet another master’s degree. This one from the School of the Art Institute of Chicago. He received his master’s in fine arts from studio arts and sculpture. He earned this degree in 2010. With these degrees Hood makes himself into a well-rounded designer who has a great creative aspect and one that can figure out how to make what he wants into a reality. Since the opening of Hood Designs Walter Hood has been involved in a numerous amount of big projects. Hood Designs creates projects that are everyday, occasional, and temporary. Each of these categories has their own way to represent what Hood wants to present. His everyday projects are ones that are what one would think that they are. Places that are meant to be visited everyday and used on a regular bases. His occasional projects are ones that should only a few times throughout life. Hood and his team also create temporary displays and projects. Their temporary projects are made to have strong meanings and are only available for a temporary time so people have to visit them while they can.
​            While Walter Hood has his own firm in Oakland he also is a professor at his college where he earned his master’s degrees in landscape architecture and architecture, University of California, Berkeley. As a professor Hood teaches his students a drawing workshop and an introduction to design. He is a teacher as well as a pursuer in his field. Being a teacher allows him to help mold a new generation of designers into ones that will understand design and push themselves into pursing new ideas.
“In my teaching and practice, I am committed to the development of environments which reflect their place and time specifically through how people inhabit various geographies.” “They assimilate the past and look forward into the future.” “I am an artist, designer, and educator.” All of these are statements from Walter Hood himself, and they represent what he thinks design is and can stand for, and how who he sees himself as. He is saying that he wants to create spaces for people that will make them feel and understand how their environment works around them. He is also saying that he wants his designs to look like they could fit in with the past but at the same time last for generations into the future. The way Hood sees himself is as he stated, an artist, designer, and educator. He expresses his artwork through his designs and is able to see them come to life. He also enjoys educating his students to hopefully become passionate about their work and try to make theirs a reality.
​            Walter Hood has been involved in a numerous amount of projects throughout his design career. Three big projects he has been involved in are The New deYoung Museum, Yerba Buena Lane, and Baisley Park, 50 Cent Garden. 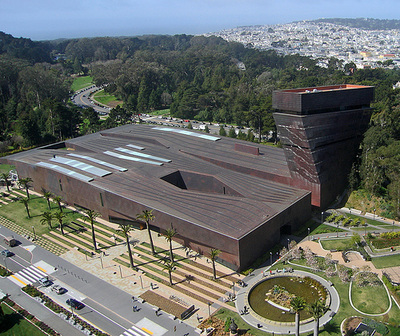 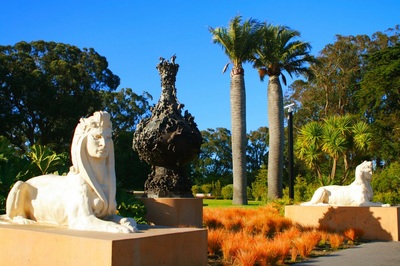 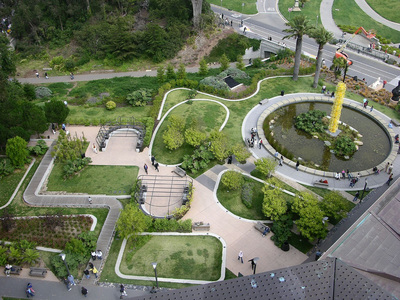 POOL OF ENCHANTMENT AND SCULPTURE GROUNDS
The New deYoung Museum is a museum is in San Francisco California and was redone from the years 2000 to 2005. Walter Hood and his team were leaders of the landscape design for when the museum went under its remodeling. The landscape around the museum became a strong link for the building with access to the interior from all four sides, making the whole site work as one. Hood created a public sculpture garden, a terrace under a cantilevered roof, a children’s garden, and an overall area that works well for people of all of all ages. I think that since the whole museum went under construction that the landscape and building are able to work so well together is because all the designers and builders were able to collaborate with one another to create one whole design instead of two separate ones. Also I am a fan of how Hood’s design encourages visitors of all ages to visit the museum instead of designing for one group of users. I enjoy that the landscape itself is an exhibit on its own. The site uses hills, paving patterns, sculptures, and plantings to create pathways and open spaces for people and art to be together. 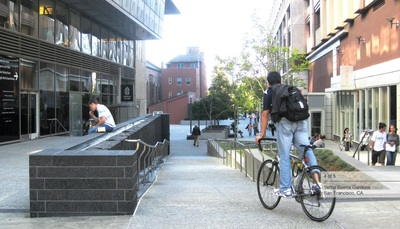 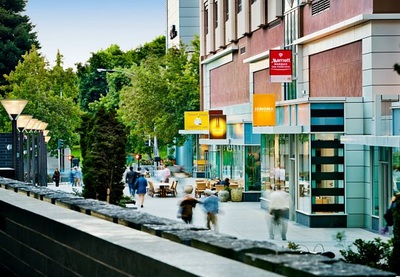 SOCIAL ASPECT
Yerba Buena Lane is a hybrid lane/plaza/social infrastructure in the city of San Francisco. Being a hybrid design makes the use of the space hybrid as well. Throughout the space there are spaces for people to flow through, sit down, and take longer breaks. These spaces consist of series of ramps and stairs for the human traffic, benches and seats integrated throughout the whole site, and there are multiple materials used in the Lane too. These range from natural materials like plants and water to metals. Many of the materials make up the social framework because they create spaces without making them into rooms. Some of these spaces are fountains, kiosks, and screenings. These attributes are what make this site the social space it has become. I really enjoy these types of spaces because these places promote people to walk to destinations. This lane creates a fun way to commute through the city and the lane has destinations along it making it a great place for people to socialize. The design is also a positive one. I really like how there are different stairs and ramps that go though the lane giving multiple choices for people to take. The overall idea of making spaces that makes people want to be outside and walk is always a positive and can benefit so many people. 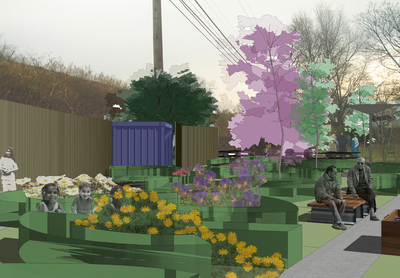 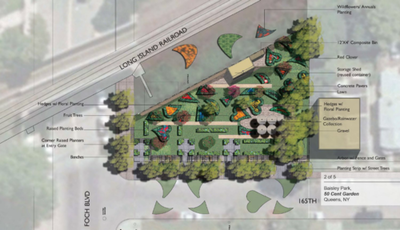 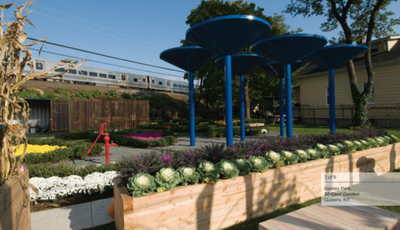 RAINWATER HARVESTING
Baisley Park is another one of Hood’s projects that makes a strong impact on the community. This project is in Queens New York so it’s showing how Hood expands his work from coast to coast. The idea of this park is to be a community garden for the people of Jamaica Queens, and 50Cent’s G-Unity Foundation funded the project. This project shows how Hood likes to connect and help out the black community. For inspiration of the garden Hood based his design off of the Kitchen Gardens of Villandry France. Creating different spaces for different plant materials. There is an underground cistern that collects rainwater and that is used for the irrigation of the gardens. The rainwater catchment system provides a space for the local children to play underneath. Having children be active in the garden is a big part of the project because it is a community garden and once those children become older they will be able to take care of the garden. Hood wants there to be a sense of ownership of the garden for the community members. It is a great way to make people understand responsibility and teach them the values of growing their own food. The fun design with colors and spaces to play makes it a place that everyone should be drawn towards. Also the use of plants as a fence hides the garden and makes people want to find out what it is. It’s great that Hood extends his work to New York to do a project that isn’t one that gets a ton of attention; it’s for a small group of people. That tells me Hood truly wants to help these people.

Walter Hood has made himself into a leading designer in the landscape field. With the creation of his own firm, Hood Designs, Hood is able to design and produce the spaces that he feels are necessary for people to have in their lives. Hood has made himself into a figure that wants to help communities. He has created so many projects that benefit the community and encourage people to be active in their community.